The Molino di Mezzo, also known as the Prussia Mill or the Gridello Mill, after the last two families that lived there, is located in via della Repubblica, in the southern part of Spilimbergo (near the former railway station).  The mill already existed in 1391, exploiting the artificial canal of Spilimbergo to grind the wheat. In ancient times, mills only served their purpose and did not have any architectural relevance. It is presumed that the mill was quite small, one floor only, and had two grinders. Following its continuous use and growing importance, an additional room was probably added on the upper floor for the miller and his family, so that they could check on flour thieves. The many tremors that hit Friuli in early 16th century and the violent earthquake in the late 18th century led to many modifications and reconstructions up to its current appearance.

In 1885, Alessandro Mongiat bought the mill, which was in a poor state, from Gualtiero of Spilimbergo. Soon after the First World War, he sold it to Osvaldo Cazziti also known as Prussia. In 1929, the mill, which at that point had three stone grinders, was bought by Dante Gridello, who passed on the business to his son Guido.

The mill was equipped with three external wooden wheels and relative transmission shafts until 1947, when they were replaced by a single wheel with an iron shaft. Corn, barley, oats, and wheat were the grains ground there. Later on, they also added the mallet for beating codfish.

Guido Gridello and Cesarina Pasquon closed down the business on 30 December 1995, after supplying even nearby towns with flour, broken grains for animal feed, and after beating tonnes of codfish, mainly for the Osteria al Bachero in Spilimbergo.

Months of restoration works finally led to the reopening of the mill in 2017. It is now run by the Lis Aganis Ecomuseum and has become an exhibition centre with multisensory experiences where children and young people can learn about the art of milling. The top floor of the building houses a multimedia room for small meetings and conferences organised by the nearby schools. Another room houses an impressive taxidermy collection of animals of the area donated by Graziano Ponzi. 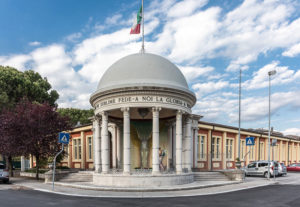 The World War I memorial is located in Via Corridoni. In addition to the impressive round capital topped by a dome supported by 8 columns, it is worth noticing the mosaic flooring and wall. The monument includes the list of 177 residents who died or went missing during the First World War.