Other events in Spilimbergo

Other events in Spilimbergo

Every year, the City of Mosaics hosts various national and international initiatives: 6 great events not to be missed!

Here is a list of dates, names, and venues: Spilimbergo is waiting for you!

The best athletes compete in this mountain bike race through the streets and pathways of the Pordenone foothills and the right bank of the Tagliamento. The majestic Friulian river is the setting par excellence of these glorious battles. The event takes place over a weekend for great fun on two wheels!

Spilimbergo’s festival dedicated to directors of photography. This festival stems from an idea by Gloria De Antoni and is organised in collaboration with Donato Guerra. Every year the Spilimbergo Quartz Award goes to the best director of photography of the latest season’s Italian films. During the ten days of the event, cinematography students from national and international institutes, including the Centro Sperimentale di Cinematografia (Experimental Film Centre) are involved in masterclasses and conferences. Famous guests and great projections make this a very popular festival among film enthusiasts.

For many years, Udine, Spilimbergo, Villa Manin, Tolmezzo, and even Koper in Slovenia have been welcoming the Folkest travelling festival. A colourful festival with all types of artists. Ancient legends, everyday stories, heroic sagas, and tales that belong to everyone and are part of the popular culture. Often, these stories are told using different languages. It’s a music festival to discover the cultural roots of Spilimbergo and honour it with concerts that are always sold out!

A photography exhibition that lasts all summer long. Every year, CRAF (Research and Archiving Centre of Photography) impresses enthusiasts with prestigious guests. This important exhibition takes place in the beautiful setting of Palazzo Tadea.

The annual exhibition of the works of art created by the students of the Friuli School of Mosaic Art. During this event, the School opens its doors to visitors, who can take a look at the classrooms and workshops where the students have shared the experience of creating traditional and contemporary mosaics. A one-year course to study the various types of mosaics and texture, experiment with materials, shapes, colours, and spaces, evoking worlds and thoughts explored through the students’ mosaics and interpretations. 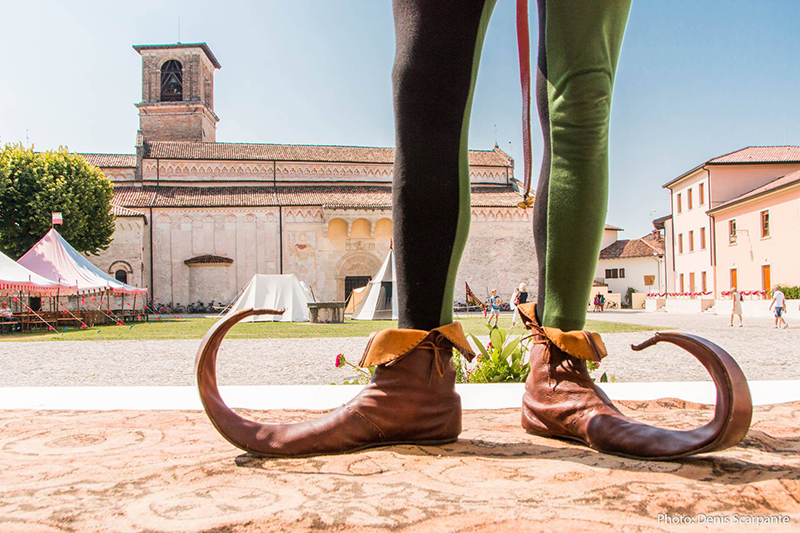 Probably the most popular event for the locals who get to travel back to the Renaissance period for a long weekend. On the days of its Patron Saints, Spilimbergo relives the glories of the early 16th century. From early in the morning to late at night, visitors can wander around the streets of Spilimbergo, under the porticos, in the castle’s courtyard and in Piazza Duomo to admire the artefacts of artisans and watch jugglers, acrobats, musicians, and flag throwers, and can enjoy a meal in one of the ancient taverns. In this colourful crowd, you might encounter commoners doing their shopping, nobles taking a walk, and beggars pleading passers-by for money. This Spilimbergo of the past is very well worth a visit.
The event is organised by the Spilimbergo Promotion Office.