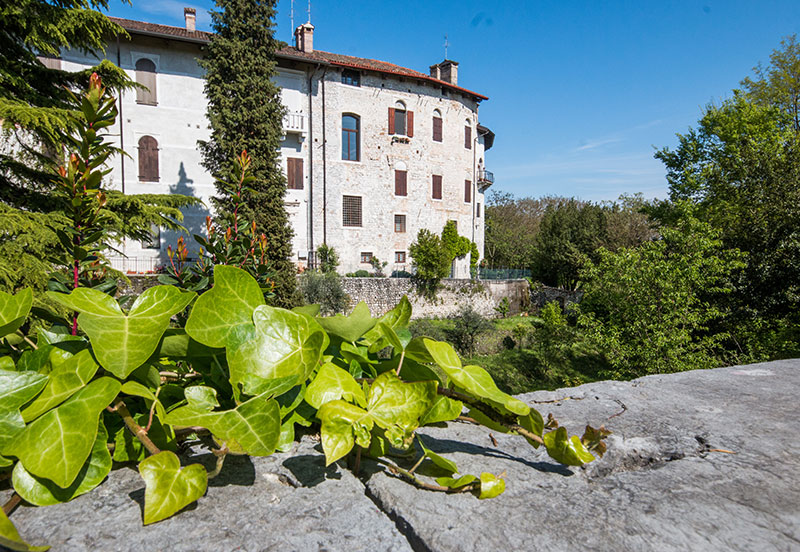 The Lords of Spilimbergo

The history of the Spilimbergo Castle is intertwined with the history of the Spengenbergs, the Lords of Spilimbergo. This noble family from Carinthia were loyal to the Empire and were among the Region’s most prestigious families. They were also members of the Parliament of Friuli and ministeriales of the Patriarchate of Aquileia.

They often leveraged their power and prestige to oppose the Patriarch, and they plotted against him more than once.

The most famous episode occurred in 1350, during the civil war that tore Friuli. In the Richinvelda plain, a few kilometres south of the town, a group of feudatories, who had set off from the Castle led by the Spengenbergs, ambushed and killed the old Patriarch (later beatified), Bertrando di San Genesio. This episode earned them the nickname of bertramini or beltramini, which is still used for the people of Spilimbergo today.
The Castle was under siege many times during the medieval wars between the Venetian and the Friulian lords, and resisted many attacks from the Camino family.

The castle was destroyed, demolished, reconstructed, and expanded many times over the centuries; therefore, it is impossible to know what it looked like at the time.
What we see today of the Spilimbergo Castle is the result of the many changes that have occurred over the years. 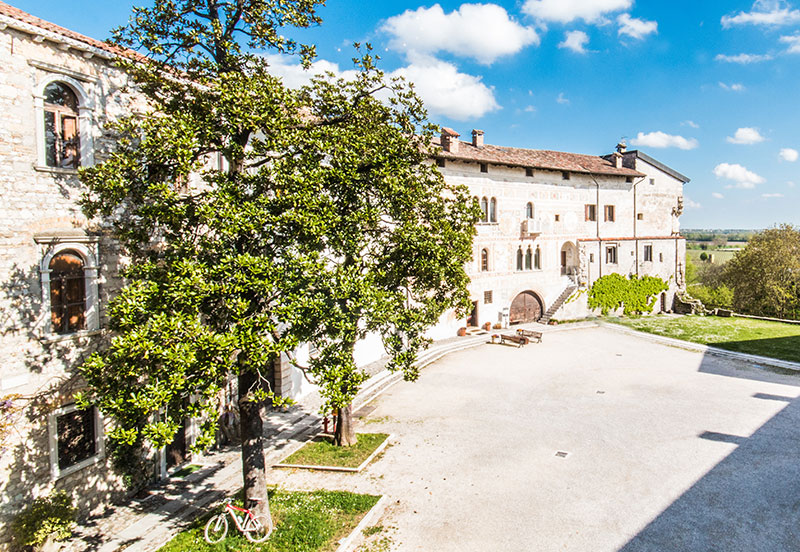 After being damaged by an earthquake, the castle was set on fire in 1511 during a popular revolt. The south wing was never reconstructed. Only the so-called Painted Palace was saved. It was modified again in 1566. In 1865, the tower on the bridge was demolished and the entrance expanded. Many other changes (removal of the drawbridge, towers, battlements, terraces, and gardens) led to the current appearance.
Today, the castle is a conglomeration of stately homes arranged in a circle around a large central courtyard. It is half-surrounded by a moat, while the rest of it sits atop an escarpment over the Tagliamento.

Once you cross the bridge over the moat and pass under the gate tower, you get to the courtyard.

On the left, there is Palazzo Tadea (1566), once the Town Hall. Its construction started under Bernardo and was completed by his wife Tadea of Spilimbergo in 1566. On the first floor if features a beautiful room with 16th-century stuccoes.

Next to it is Palazzo Ciriani (now Furlan), which houses a frieze with stuccoes by Giovanni da Udine dating back to around 1542, and remains of 16th-century frescoes.

A beautiful round-arched stone door embellished by fossils opens to Palazzo Troilo (16th century), built by Sir Troilo after the fire in 1511. In 1544, Marco Tiussi painted the frescoes which however soon got ruined. In 1864, when Friuli was under the Austrian rule, the Palazzo was entrusted to the Municipality, which used it as a prison until 1968. Today, you can still see 2 cells on the ground floor. The first floor houses the municipal archive.

Further to the right is Palazzo Dipinto, the Painted Palace, which is the main and most eye-catching building of the complex. It was rebuilt at the end of the 14th century on the ruins of a previous building that had been destroyed by fire. It hosted Charles V in 1532, Bona Sforza, Queen of Poland in 1566, and Henry III of France in 1574.

The fascinating façade features frescoes depicting horses and grooms, cardinal and theological virtues, all of which are attributed to Andrea Bellunello (15th century). There are also 2 three-light windows, one in Gothic and the other in Renaissance style (1582). The building is further embellished by stone elements by Pilacorte: 2 balconies and a terrace. 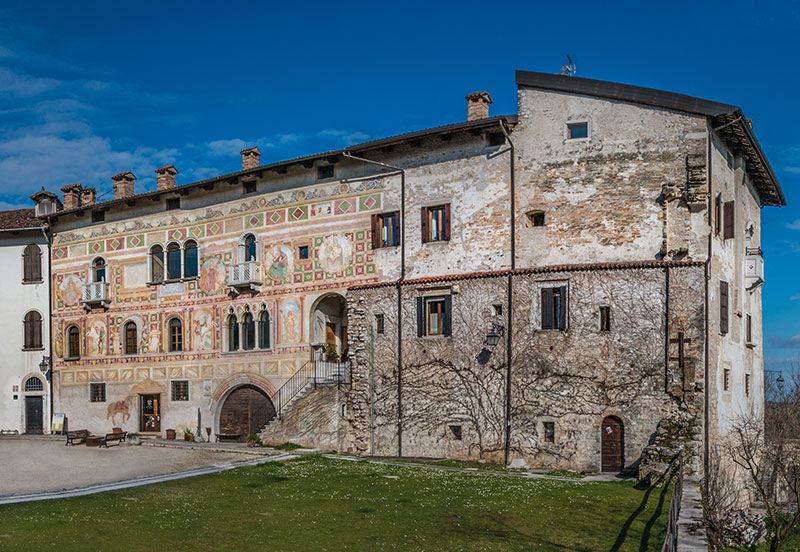 The next-door building – of Count Ercole – boasts the coat of arms of the Spilimbergo painted by De Sacchis aka Il Pordenone.

The extension of its structure bears witness to a previous wing of the castle that connected the eastern wing to the western one. However, after the fire in 1511, this part was never reconstructed. Today it offers a panoramic view of the Tagliamento.

The south-western part of the castle is occupied by a building whose lancet windows and unusual thickness of its perimeter walls bear witness to its ancient origin.

The western wing consists of a complex of 16th and 17th-century private buildings that closes the circle and leads back to the gate tower.

Only a few traces are left of the castle’s original defence structures, which consisted in a double drawbridge, mighty walls and towers.